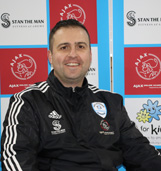 Peter came to Australia from the UK to sign for Phil Stubbin's Heidelberg United in 2005. After consistently playing finals in the VPL, he then signed as a player assistant for Port Melbourne taking them from State League 2 to Victorian Premier League in 3 years as well as coming Runners-up in the State Kockout Final.

Peter then joined Moreland Zebras as player assistant in the NPL1 in 2013. Due to an injury, he was then forced to retire early. Peter then joined Green Gully to take over the regins as Under 20's coach and since then, a number of players in this team have stepped up and played senior football with the club.